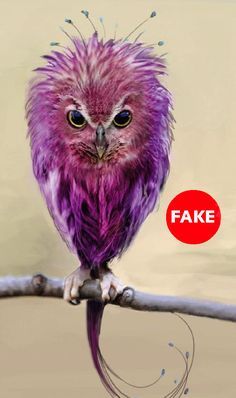 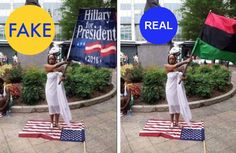 Not a Hillary fan, not a fan of this bitch either, but let's keep it real. It's an African flag she is holding. 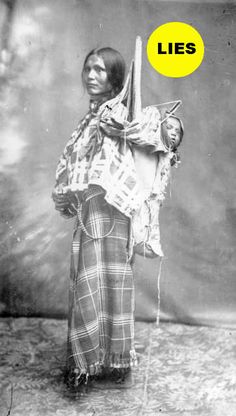 Sacajawea and baby? No. Mary Enos and baby - Shoshoni – 1872--I see this picture a lot identified as Sacajawea, who died in 1812, well before the invention of photography.

Another fake photo of MM and JFK together on the left. Real photos on right. 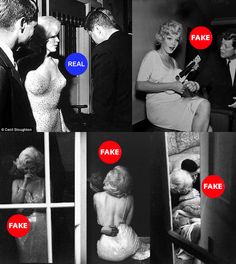 The photo in the upper left is the ONLY photo of Marilyn Monroe and JFK together. ALL the others are fake. A person named Alison Jackson has distributed dozens of these fake photos of Marilyn and other male celebrities together, as well as fakes of other female celebrities such as Princess Diana.

Marilyn Monroe and James Dean together in NYC? No. Bottom two are the real photos. 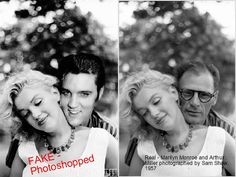 Elvis with his Star on the Walk of Fame? No. Elvis didn't get his walk of fame star until 1960. The image on the right is from a 1956 recording session in New York and has been colorized and photoshopped onto the walk of fame star photo. 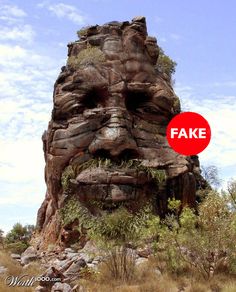 Face in natural rock formation? Nope. Photoshop. The blurry areas give it away. 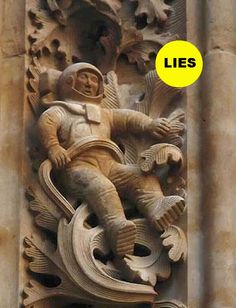 Proof of Aliens carved on ancient temple? This story was even promoted by The History Channel. The Truth: The restoration of the ancient Cathedral of Salamanca in 1992 integrated modern and contemporary motifs, including a carved figure of an astronaut.

Fake - Macro Fauxtography - Now you can see how the shots were staged and taken. The bottom set shows a leaf sticking in the plant underneath(aloe) and injured or dead frogs staged for the shots. Original found here at bottom of page: http://artoftheprank.com/category/fact-or-fiction/fraud-deception/ Ethics here: http://sgmacro.blogspot.com/p/macro-photography-ethics.html Complete images at link..........(Many, Many More !) 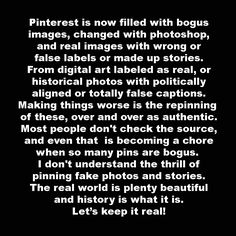 Is this one of the most amazing and popular photos taken during WWII? Well it is popular, on Pinterest at least. These are detailed figures made by Mark Hogancamp. He built a 1/6th scale WWII-era town in his backyard. 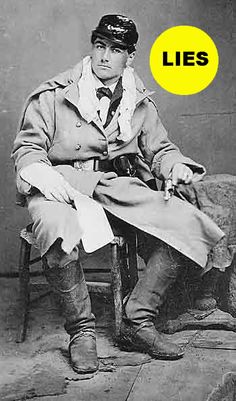 Is this the legendary John (Jeremiah) Johnston, the original mountain man known for his feud with Crow Indians and the main character of Robert Redford's movie? No, he isn't; he's Charles Erskine Scott Wood, 1874 graduate of West Point and Indian fighter in the Nez Perce War of 1877. He's the one who translated Joseph's speech of surrender. He became a lawyer and good friend of Chief Joseph. Johnston was a much rougher character. 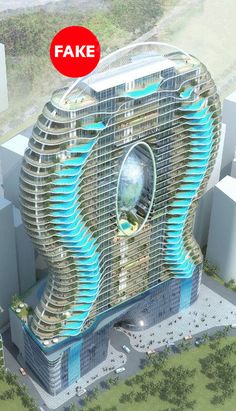 Zwembalkons in Mumbai, India. Each room has its own pool. Not. Only a very ambitious concept, not real.

Is this one of the most feared of all London's street gangs in the late 1880's? A group of female toughs known as the Clockwork Oranges, who would later inspire Anthony Burgess' most notorious novel? Nope, actually this story was made up. This gang did not exist. This is simply an old photo of Victorian women smoking and acting like men.